I am so happy that Spring is upon us…a time to give thanks for new life, fresh flowers, and warm weather. My “baby” girl also just turned 17! I did find myself pondering how quickly the time has flown since I became her mother. It is bittersweet knowing that I am entering into a new phase of motherhood, one where my nestlings are not so dependent on me and their Papa as much. It is of course very nice to have children that can do a lot for themselves but I still have my tearful moments. I’ve simply enjoyed being a Mom so much! Spring is a very special time and it means new babies abound in nature. 💛 It’s a beautiful time of year and a reminder that life is so fleeting, and so we must enjoy every minute…Happy Spring!☀️⚘🌻💚

And then, it happened…I felt the pull of my innermost desires to live the life of a woman uninhibited, unafraid and filled with colorful, divine experiences. There was always an inkling, a reminder of how life could be if I opened up and set myself free.

As I take the time to write with more passion and purpose, I feel a new part of myself coming into being.

She has no fears, yet she takes careful strides. The waters are her ever cleansing hope especially when she visits the sea. She hears and sees nature unfolding around her and she notes when there is a message to be learned. She sensually embraces her mind, body and spirit and desires to seek how high love can reach. This is evident in how she looks in her own eyes each day, knowing that she is worthy of the same love that she has so graciously given to others. She knows that self love is healing to her deep down where she once felt unworthy. The Sun, her light of day nourishes her soul and the garden she grows. Her hands dig deep into the earth, she is ever fascinated by how the glowing warm energy initiates and sustains life. She has a deeper understanding of her emotions, feeling ever so connected to the Moon’s call…She does not always seek attention, yet she always seeks the connection with nature, other women and her daughters at those intuitive times. She is not fearful or apprehensive of her tears, she sheds them as needed, feeling lighter with each warm flow from her eyes.

Being a sap for nature will truly be the death of me…I really feel that way, I have this soft spot in my heart for animals that has been with me since childhood. Wanting to save the neighborhood kittens, cringing when I would see a dog in the street or begging my mother to help me with yet another rescue of a distressed animal. And it hasn’t changed really, which I’m fine with, but there are times when I feel overwhelmed by the emotions that play out in these instances. Such is the story of a Great Blue Heron, that my daughters lovingly named “Wind”.  Wind loved to fly in to fish near the lake behind our townhouse. I had created a few posts on my Google blog about how one day, my youngest daughter noticed that she had fishing twine wrapped around her legs. The situation was preventing her to stand on both of her legs. This of course meant trouble fishing, which could be detrimental for a Great Blue Heron. We kept a close eye on her, and noticed how she would come flying in when we were out throwing bread for the ducks onto the lake. Perhaps she was trying to fish? Often she would try, but most of the time, she would eat the bread landing and floating around her. We were very happy that she could still fly but worried about her legs. So we called our local wildlife center to report the heron. They did try to come out a couple of times but she would fly away when she sensed them close by. We spoke softly to her in the evenings, my youngest daughter and I, sometimes with her sister, sometimes just us. We were grateful for how she seemed to trust us as she would not fly away when we were close to her. 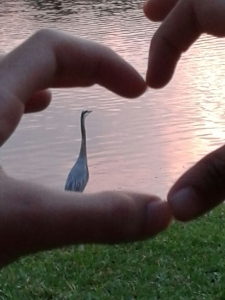 Finally, one day, there was knock on my door and I could see that the heron had been rescued. One of the wildlife rescuers held up a clear plastic bag with the fishing twine that became embedded in her legs such that when they removed it from her, it exposed a deep cut on the leg that she had not been able to stand on. I talked for a bit with the guys, and they shared with me that they had used fish to get her to come closer to them. She was so hungry for it that it took her off guard. I felt a tinge of worry about her legs but felt good that she would be helped. We reach our hands out to touch her soft deep, grey feathers; she was a beautiful bird and we could see that she was afraid by looking in her eyes.

A few days went by and I called to check on Wind. I was informed that she was a bit stressed but doing ok. She received treatment and her legs were bandaged up to begin healing. The lady I spoke with shared with me that they would bring her back to our location when she was healed. We felt a sense of relief and our lives resumed with the busyness of school, work, writing (for me), field trips and the sweet call of summer nearing. After a few weeks, my youngest asked me to call the wildlife center to check on Wind. I wanted to do it, and every time I meant to, something would come up or I would forget. Today though, I called. I had a feeling of uncertainty and it was confirmed when I was told that Wind, the Great Blue Heron had died later in the evening on the same day that I had called a few weeks ago. I was sad, I looked out onto the lake and knew that she was not coming back. I told my girls, they were quiet for the first few minutes. I hugged them and told them it was okay to be sad, and even okay to cry. I told them sometimes we may not always understand why, even though we wish we could.  I was quiet as well, but I tried not to let it get to me. After all, these things happen.  But just this afternoon as I sat outside eating my lunch and looked out onto the lake, I cried. I cried because even though this was an animal, it still hurt. Her element was here, this lake was all she knew. I anticipated the day when she would return, but it was not to be. This was yet another lesson for me; things don’t always end the way I think they should end. Such is life; the embodiment of change. A day can bring any new thing, or situation. We never know. What I am at peace with is that my children learned a lesson in empathy. We did what we could on our end, we helped another that could not help herself and for that my heart rejoices.